To study and verify the truth table of Hex Inverters with Open-Collector Outputs using 74LS05.

For Hex Inverters with Open-Collector Outputs:

An open collector is a common type of output found on many integrated circuits (IC), which behaves like a switch that is either connected to ground or disconnected.

NOT gate is a digital circuit that has a single input and single output. The output of NOT gate is the logical inversion of input. Hence, the NOT gate is also called an inverter.

Logic NOT Gates are available using digital circuits to produce the desired logical function. The standard NOT gate is given a symbol whose shape is of a triangle pointing to the right with a circle at its end. This circle is known as an "inversion bubble". Logic NOT gates provide the complement of their input signal and are so called because when their input signal is "HIGH" their output state will NOT be "HIGH". Likewise, when their input signal is "LOW" their output state will NOT be "LOW". As they are single-input devices, logic NOT gates are not normally classed as "decision" making devices

This NOT gate produces an output Y, which is the complement of input, A. 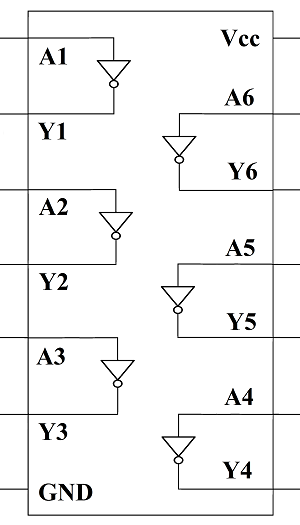 We have learned the Hex Inverters with Open-Collector Outputs using 74LS05 IC according to the IC pin diagram.