To study and Verify the BCD to Excess-3 code converter using logic gates.

Binary Coded Decimal (BCD) Code -​ Digital numbers are represented, stored and transmitted as group of binary bits. This group is also called as binary code decimals. Weighted binary codes are those binary codes which obey the positional weight principle. Each position of the number represents a specific weight. Several systems of the codes are used to express the decimal digits 0 through 9. In these codes each decimal digit is represented by a group of four bits.

In this code each decimal digit is represented by a 4-bit binary number. BCD is a way to express each of the decimal digits with a binary code. In the BCD, with four bits we can represent sixteen numbers (0000 to 1111). But in BCD code only first ten of these are used (0000 to 1001). The remaining six code combinations i.e. 1010 to 1111 are invalid in BCD.

As is clear by the name, a BCD digit can be converted to it’s corresponding Excess-3 code by simply adding 3 to it. 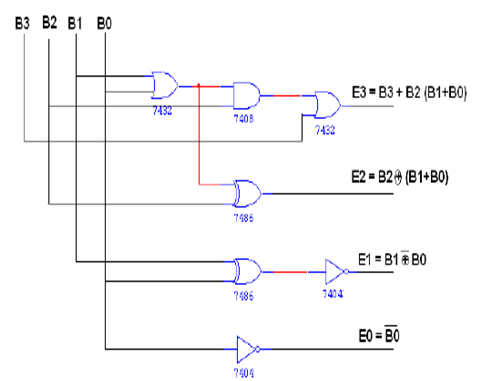 We have learned the Implementation of BCD to Excess-3 code converter using logic gates.