4-Bit Magnitude Comparator - ​ Comparators with three output terminals and checks for three conditions i.e greater than or less than or equal to is magnitude comparator. The Comparator is another very useful combinational logic circuit used to compare the value of two binary digits. A magnitude digital Comparator is a combinational circuit that compares two digital or binary numbers in order to find out whether one binary number is equal, less than or greater than the other binary number. We logically design a circuit for which we will have two inputs one for A and another for B and have three output terminals, one for A > B condition, one for A = B condition and one for A < B condition.

Digital Magnitude Comparators are made up from standard AND, NOR and NOT gates that compare the digital signals present at their input terminals and produce an output depending upon the condition of those inputs. Here, two 4-bit words (“nibbles”) are compared to each other to produce the relevant output with one word connected to inputs A and the other to be compared against connected to input B as shown below. 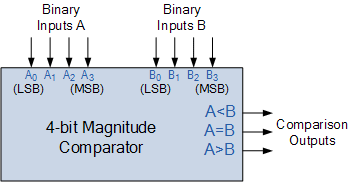 It can be used to compare two four-bit words. The two 4-bit numbers are A = A3 A2 A1 A0 and B3 B2 B1 B0 where A3 and B3 are the most significant bits. It compares each of these bits in one number with bits in that of other number and produces one of the following outputs as A = B, A < B and A>B. 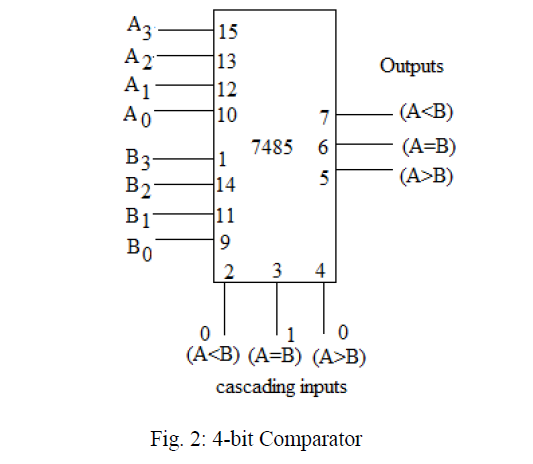 We have learned the Implementation of 4-Bit Magnitude Comparator using IC-74LS85.