To study and verify the truth table of 2-Input Ex-OR Gate.

Ex-OR GATE - ​ The full form of Ex-OR gate is Exclusive-OR gate. Its function is the same as that of OR gate except for some cases, when the inputs having an even number of ones.

In other words, the output of an Exclusive-OR gate ONLY goes “HIGH” when its two input terminals are at “DIFFERENT” logic levels with respect to each other. The Exclusive-OR Gate function, or Ex-OR for short, is achieved by combining standard logic gates together to form more complex gate functions that are used extensively in building arithmetic logic circuits, computational logic comparators and error detection circuits.

The two-input “Exclusive-OR” gate is basically a modulo two adder, since it gives the sum of two binary numbers.

"If inputs having an odd number of ones, then Y is true" 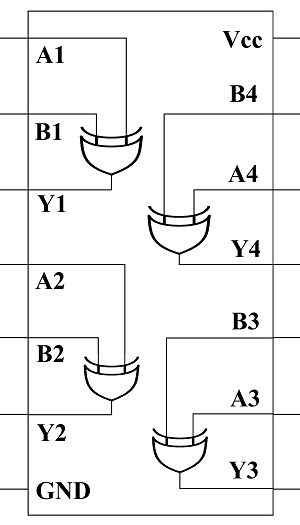 We have learned the 2-Input Ex-OR Gate IC according to the IC pin diagram.