They are capable of interpreting input voltage according to two threshold voltage which is for low to high and the other one is for high to low output transition. The difference between Schmitt gates and conventional gates is that the former have the hysteresis nature which is identical to the B-H loop for a ferromagnetic material.

NAND gate is a digital circuit that has two or more inputs and produces an output, which is the inversion of logical AND of all those inputs. Logic NAND Gates are available using digital circuits to produce the desired logical function and is given a symbol whose shape is that of a standard AND gate with a circle, sometimes called an "inversion bubble" at its output to represent the NOT gate symbol with the logical operation of the NAND gate. 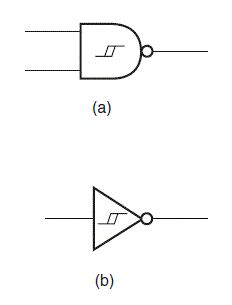 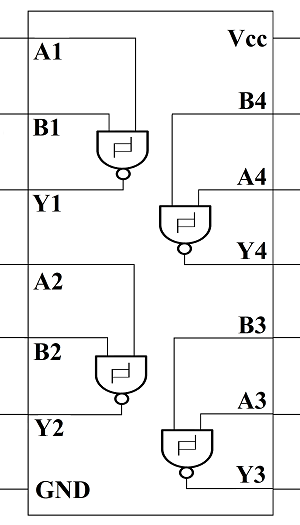 We have learned the Quad 2-input NAND Gates with Schmitt Trigger Inputs IC according to the IC pin diagram.