To study and verify the Half Adder Using Basic Gates.

For Half Adder Using Basic Gates:

HALF ADDER - ​​ An adder is a digital logic circuit in electronics that implements the addition of numbers. In many computers and other types of processors, adders are used to calculate addresses, similar operations and table indices in the ALU and also in other parts of the processors. These can be built for many numerical representations like excess-3 or binary coded decimal. Adders are classified into two types: half adder and full adder. The half adder circuit has two inputs: A and B, which add two input digits and generate a carry and sum.

By using half adder, you can design simple addition with the help of logic gates. A half adder is used to add two single-digit binary numbers and results into a two-digit output. It is named as such because putting two half adders together with the use of an OR gate results in a full adder. In other words, it only does half the work of a full adder.

AND GATE - ​ It is a digital circuit that has two or more inputs and produces an output, which is the logical AND of all those inputs. It is optional to represent the Logical AND with the symbol ‘.’

Logic AND Gates are available using digital circuits to produce the desired logical function and is given a symbol whose shape represents the logical operation of the AND gate. Because the Boolean expression for the logic AND function is defined as (.), which is a binary operation, AND gates can be cascaded together to form any number of individual inputs. However, commercial available AND gate IC’s are only available in standard 2, 3, or 4-input packages. If additional inputs are required, then standard AND gates will need to be cascaded together to obtain the required output value.

This AND gate produces an output Y, which is the logical AND of two inputs A, B.

Ex-OR GATE - ​ The full form of Ex-OR gate is Exclusive-OR gate. Its function is the same as that of OR gate except for some cases, when the inputs having an even number of ones.

In other words, the output of an Exclusive-OR gate ONLY goes “HIGH” when its two input terminals are at “DIFFERENT” logic levels with respect to each other. The Exclusive-OR Gate function, or Ex-OR for short, is achieved by combining standard logic gates together to form more complex gate functions that are used extensively in building arithmetic logic circuits, computational logic comparators and error detection circuits.

The two-input “Exclusive-OR” gate is basically a modulo two adder, since it gives the sum of two binary numbers.

"If inputs having an odd number of ones, then Y is true" 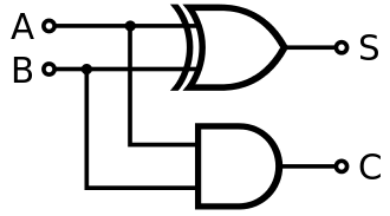 We have learned the Half Adder Using Basic Gates.